January 27, 2011
This is a profile I wrote for Skinnie Magazine on comedian Brad Williams. 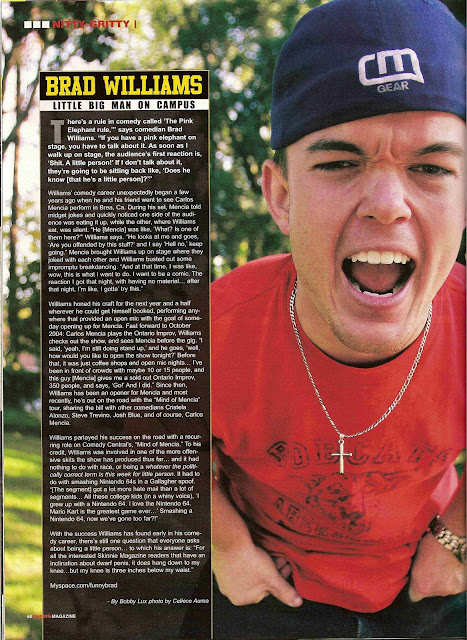 “There’s a rule in comedy called ‘The Pink Elephant rule,’” says comedian Brad Williams. “If you have a pink elephant on stage, you have to talk about it. As soon as I walk up on stage, the audience’s first reaction is, ‘Shit. A little person!’ If I don’t talk about it, they’re going to be sitting back like, ‘Does he know [that he’s a little person]?’”
Williams’ comedy career unexpectedly began a few years ago when he and his friend went to see Carlos Mencia perform in Brea, Ca. During his set, Mencia told midget jokes and quickly noticed one side of the audience was eating it up, while the other, where Williams sat, was silent.
“He [Mencia] was like, ‘What? Is one of them here?’” Williams says. “He looks at me and goes, ‘Are you offended by this stuff?’ and I say ‘Hell no,’ keep going.”
Mencia brought Williams up on stage where they joked with each other and Williams busted out some impromptu breakdancing.
“And at that time, I was like, wow, this is what I want to do. I want to be a comic. The reaction I got that night with having no material... after that night, I’m like, I gotta try this.”
Williams honed his craft for the next year and a half wherever he could get himself booked anywhere that provided an open mic, with the goal of someday opening up for Mencia. Fast forward to October 2004: Carlos Mencia plays the Ontario Improv, Williams checks out the show, and sees Mencia before the gig.
“I said, ‘yeah, I’m still doing stand up,’ and he goes, ‘well, how would you like to open the show tonight?’ Before that, it was just coffee shops and open mic nights. I’ve been in front of crowds with maybe ten or fifteen people, and this guy gives me a sold out Ontario Improv, three hundred and fifty people, and says, ‘Go!’ And I did.”
Since then, Williams has been an opener for Mencia and most recently, he’s out on the road with the “Mind of Mencia” tour, sharing the bill with other comedians Cristela Alonzo, Steve Trevino, Josh Blue, and of course, Carlos Mencia.
Williams parlayed his success on the road with a recurring role on Comedy Central’s, “Mind of Mencia.” To his credit, Williams was involved in one of the more offensive skits the show has produced thus far and it had nothing to do with race, or being a whatever the politically correct term is this week for little person. It had to do with smashing Nintendo 64’s in a Gallagher spoof.
“[The segment] got a lot more hate mail than a lot of segments. All these college kids (in a whiny voice), ‘I grew up with a Nintendo 64. I love the Nintendo 64. Mario Kart is the greatest game ever.’ Smashing a Nintendo 64, now we’ve gone too far?!”
With the success Williams has found early in his comedy career, there’s still one question that everyone asks about being a little person, to which his answer is: “For all the interested Skinnie Magazine readers that have an inclination about dwarf penis, it does hang down to my knee... but my knee is three inches below my waist.”
article Brad Williams comedy profile skinnie magazine