Showing posts from February, 2011
Show all

February 08, 2011
The top pound for pound fighter in the world was back in Vegas to defend his UFC Middleweight Championship and extend his records for most consecutive wins and title defenses. To do so, Anderson Silva would have to find a way through former UFC light Heavyweight and tournament champion, Vitor Belfort. In spite of never having competed in the UFC as a middleweight, Belfort earned his crack at the title by stopping former champion Rich Franklin in the first round at UFC 103 in September 2009. The main event was complimented with a pair of light-heavyweight tilts, one featuring fan favorites trying to line up an eventual title shot, and the other boasting a pair representing the future of the division.
The sponsors have been thanked and the judge has made his decision, so let’s go to the scorecard!
UFC Middleweight Championship Anderson Silva (c) (27-4) vs. Vitor Belfort (19-8) This fight had the promise of past Silva fights of lore with Chris Leben, Forrest Griffin, Rich Franklin, and Jame…
Post a Comment
Read more

Huckabee denies that it was intentional.
Yeah, and?
That’s why they call them subliminal. He has to deny it.
Honestly, it’s a pretty weak “hidden message.” I mean, after all, it’s a Christmas ad. The cross represents 66.6% of the word Christmas, so what’s the big deal?
Is this the first time a politician has used subliminal imagery to enhance their campaign? Hell no. It won’t be last. It’s not even the best example of a sublimin…
Post a Comment
Read more 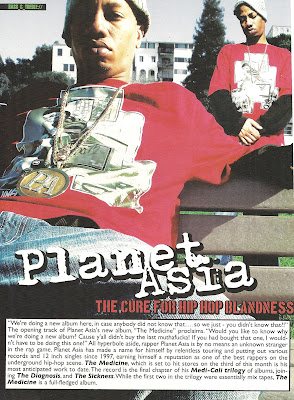 As profiled in Skinnie Magazine.

“We’re doing a new album here, in case anybody did not know that… so we just - you didn’t know that?!” the opening track of Planet Asia’s new album, “The Medicine” proclaims. “Would you like to know why we’re doing a new album? Cause y’all didn’t buy the last muthafucka! If you had bought that one, I wouldn’t have to be doing this one!”
All hyperbole aside, rapper Planet Asia is by no means an unknown stranger in the rap game. Planet Asia has made a name for himself by relentless touring and putting out various records and 12 inch singles since 1997, earning himself a reputation as one of the best rappers in the underground hip-hop scene. “The Medicine,” which is set to hit stores on 10/3/06 is his most anticipated work to date. The record is the final chapter of his “Medi-Cali” trilogy of albums, joining “The Diagnosis,” and “The Sickness.” While the first two in the trilogy were essentially mix tapes, “The Medicine” is a full-fledged album.
Planet Asia …
Post a Comment
Read more

As appeared on FLYMF.com. Original article can be found here.

So, here's something many people don't know about me: I practice voodoo. I'm pretty good at it too. I could've gone pro if but I couldn't get a deal that would make my family secure if something should ever happen to me. Also, my projected spot in the draft was low third round at best, meaning I was good enough to go pro but not good enough to really make it big.
Anyway, as the years went by and my time spent practicing voodoo went down significantly, I picked up another hobby which until now has been somewhat of a secret and that's time travel. I also found that these two hobbies can come in handy when used in combination.
You see, I went on a date recently and the girl (who shall remain nameless) and I were enjoying a lovely and getting to know each other evening, talking about goals and hobbies and our careers and when I told her mine she replied, "So, when are you going to get a big boy job?&qu…
Post a Comment
Read more

The Coreys - A Comic Strip from FLYMF.com

Here's the full collection of The Corey's comic strip from FLYMF.com.

February 03, 2011
This piece is from FLYMF.com - The original article can be found here.

Superman Returns by Batman
In the immortal words of Socrates, “How quickly you cocksuckers forget!”
In the timeless phrasing of Bobby Kennedy, "You know what a pain in the ass it is playing second fiddle. I bet if they shot me, no one would give a flying colon.”
In the uncomfortable declaration of Robin, “It’s OK, I still love you.”
What’s all the quoting about? I’ll tell you. It’s that Goddamn Superman and his new movie stealing all my thunder. What about me? What about Batman? I dealt with Arnold, Clooney, nipples on my costume, and Joel Schumacher in my last film. People said my movies were done. Last summer, I came back! So, what does Mr. Glory Hound, look at me, illegal alien (literally) from Metropolis do? He has to make his movie.
Yeee-freakin-ha. Yeah, I saw it. Whatever. Remember that Captain America movie with Ned Beatty? No? It was better. Trust me, I’m a genius.
Stop the presses! Here’s a newsflash for th…
Post a Comment
Read more

A touching tribute to the passing of Captain America by President George W. Bush (but really, by me) in Skinnie Magazine, April 2007.

My fellow Americans,
Our country has had a tremendous tragedy bestowed upon us. Americans everyone in America, whether or not you speak Alaskanese or Alabamian, are in still in the process of shock and awe.
I was busy looking on Yahoo trying to find the top story of the day. I wanted to know who was next on the chopping block on “Idol.” Instead, I saw the top story of the day was that my dear friend, Captain America, was killed.
I remember being a young man at Yale frat party when I was first introduced to the heroics of ‘ol Cap. Tommy, my buddy, had a rolled up Captain America picture book (the best kind, by the way) out on the table. I unrolled it, blew the sticky white powder off the end of it, and … I don’t remember much else from that night. What was I writing about?
[Interpreter’s note: At this point, Karl Rove whispers something in Bush’s ear]
Thank…
Post a Comment
Read more

This is a humor piece I wrote for Skinnie Magazine in March 2007. It's a brief interview with fictional character Slocomb Jones, a professional bum.

Slocomb Jones was, and is, a proud man. He walks as upright as possible for a man with scoliosis who hasn’t seen a doctor in 45 years. His liver stopped functioning in 1972, just as he was entering his prime drinking decades. He can’t remember anything after Reagan was President. He had a career that began in earnest when he was young, getting his big break at only 21 years old. Now, at 68 years old, Slocomb Jones has officially retired, and now looks to a life of relaxation. He thrived and set the standard in a career where aren’t known for their longevity. He is a true renaissance man of the streets. No, really. Slocomb Jones is a bum. Straight up.

Thanks for taking the time to share your gutter with us, Mr. Jones. Who in the Sam Hell is Mr. Jones?
Um, you. Me? Wait. Huh? Who? Is that…Really? Oh yeah, that’s right. You know, I’ve been …
Post a Comment
Read more

February 01, 2011
Originally appeared on www.thegarv.com
Nick Diaz continued to emerge as one of crown jewels of the Strikeforce promotion as he put his Strikeforce Welterweight Championship on the line against tough journeyman Evangelista “Cyborg” Santos in the main event of Strikeforce’s second card of 2011. While the card also featured a second title fight in Ronaldo “Jacare” Souza defending the Strikeforce Middleweight Championship against “Ruthless” Robbie Lawler, it was former NFL star Herschel Walker competing in only his second professional fight at age 48 who generated the most mainstream attention in the build up to the event.
The final bell has rung and the judge has made his decision, so let’s go to the scorecard!
Jenna Castillo (0-0) vs. Charlene Gellner (0-0) A pair of ladies making their professional debuts at 120lbs kicked off the night of fights in a proverbial striker versus grappler tilt. Castillo, the better striker of the two, took control of the fight early mixing up knees to the he…
Post a Comment
Read more
More posts