February 03, 2011
This piece was written under the guise of "Bustamante" a worn-out hippie who passes his time teaching tennis lessons to bored housewives in Orange County, CA.


Not Just Huckabee - Other Subliminal Messages in Presidential Politics
I listen to The Beatles. I know who the walrus is.
I jam Led Zeppelin.
I’ve licked a toad and watched "Dark Side of the Moon" linked with The Wizard of Oz.
I know subliminal. Keep this in mind.
So, the big news in politics is the Huckabee Christmas ad with a subliminal image of a cross in the background.


Huckabee denies that it was intentional.
Yeah, and?
That’s why they call them subliminal. He has to deny it.
Honestly, it’s a pretty weak “hidden message.” I mean, after all, it’s a Christmas ad. The cross represents 66.6% of the word Christmas, so what’s the big deal?
Is this the first time a politician has used subliminal imagery to enhance their campaign? Hell no. It won’t be last. It’s not even the best example of a subliminal message ever done by a politician.
Take a good look at some of these other examples of subliminal messages embedded in our political history.
1864 – Lincoln vs. George B. McClellan

The above ad seems simple enough, right? With Lincoln, you get Liberty. Lincoln towers supreme and comforts the little man with an awkward handshake while people of all color play free. Note the flag is straight up in the air.
What’s on the other side?
Ummm, if you haven’t notice, on the other side of that poster is Joseph Fucking Stalin!!! And he’s utilizing a very effeminate handshake.
Stark power and social freedom all in one package. Speaking of packages, look at the way the flag sits in Stalin's America!
That scared America even in its infancy… actually, I guess we were in our hormonal pre-teens at that point.
Fact: Had Lincoln not won the election, Stalin begins his reign of slave auctioning terror decades earlier.
1844 – James K. Polk vs. Henry Clay 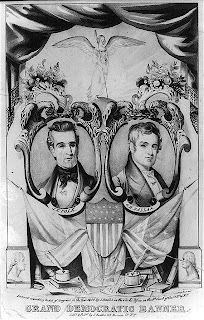 Looks like your standard 19th century candidate poster. As we were taught in American Beauty: Look Closer.
What do you see?
Candidates for President and Vice President? Wrong.
I see a demonic creature of the night.
- Flashy European style hair-do
- High collar resembling a cloak
- Over extended bow tie looking thing that covers the neck (and covering any possible neck wounds)
- Pointy chin
- Pale skin. Even in Black and White it’s very clear
- Dark black eyes
James K. Polk was a vampire!
Or so he cleverly implied to the literate population. Vampires are powerful creatures who are very capable of leading the masses.
Polk would go on to satiate the public’s blood lust with the Mexican/American War.
People ask how could we elect morons, crooks, and Alzheimer’s patients… well, back before we knew any better, we elected a vampire.
1856 John C. Fremont vs. James Buchanan


Who is John C. Fremont? Well, he was the first ever Republican Presidential candidate. He really thought he was the shit too. 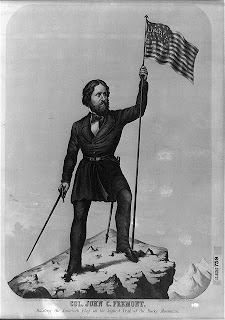 I mean I expect some hyperbole in politics, but a 400ft. sword-wielding monster? You’ve got to be kidding me.
He’s standing atop the highest point of the Rocky Mountains here without even a cold weather jacket or face protection.
He was also, ironically, the first victim of what would come to be known “republican style swift boat” campaign attack ads ripe with subliminal messages. 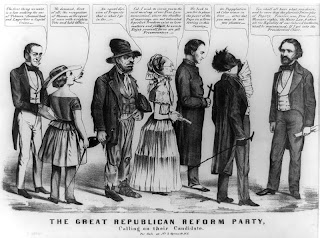 Looks like a line of people looking for answers from the new Republican candidate, but NO…
From left to right: a well-educated intellectual, a young woman who wants to be equal, a bum looking for a handout, a woman who wants to screw, the Catholics, and a black man wanting to **gasp** be equal.
Of course, Fremont said he would help these people. Unfortunately, he lost the election and the Republicans forever abandoned those principals.
Forget the second coming of Reagan… where’s the second coming of John C. Fremont?
1904 Eugene V. Debs vs. Teddy Roosevelt vs. Alton Brooks Parker 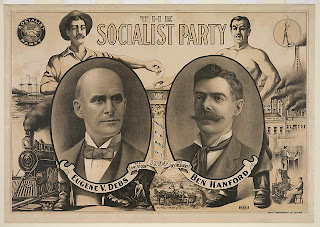 My personal favorite. What do you see?

Is that what you see?

Me? I just see a Presidential candidate.

I’m Bustamante and I approve this message.
humor politics tontoandfriends.com