May 09, 2011
This is a profile I wrote on artist Jerrell Conner for Long Beach Magazine. 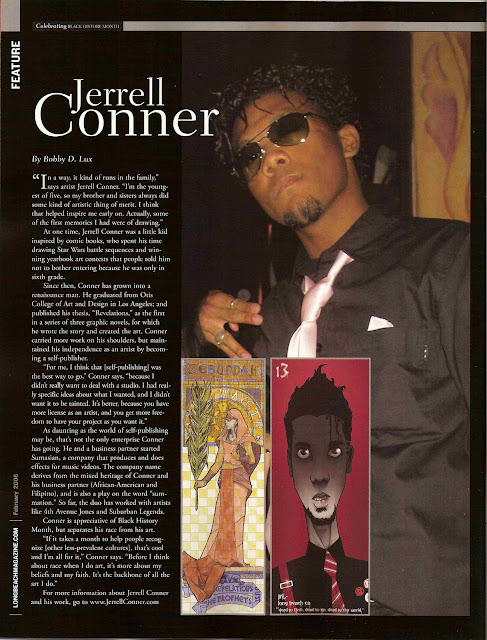 “In a way, it kind of runs in the family,” says artist Jerrell Conner. “I’m the youngest of five, so my brother and sisters always did some kind of artistic thing of merit. I think that helped inspire me early on. Actually, some of the first memories I had were of drawing.”
At one time, Jerrell Conner was a little kid inspired by comic books who spent his time drawing Star Wars battle sequences and winning yearbook art contests that people told not to bother entering because he was only in 6th grade.
Since then, Conner has grown into a renaissance man. He graduated from Otis College of Art and Design in Los Angeles and published his thesis, “Revelations,” as the first in a series of three graphic novels, for which he wrote the story as well as did the art for. Conner took more work on his shoulders, but maintained his independence as an artist as a self-publisher.
“For me, I think that [self-publishing] was the best way to go,” explains Conner. “Because I didn’t really want to deal with a studio. I had really specific ideas about what I wanted, and I didn’t want it to be tainted. It’s better because you have more license as an artist, and you get more freedom to have your project as you want it.”
As daunting as the world of self-publishing is, that’s not the only enterprise Conner has going. He and a business partner started “Sumasian,” a company that produces and does effects for music videos. So far, the duo has worked with artists like 4th Avenue Jones and Suburban Legends. The company name derives from the mixed heritage of Conner and his business partner: African-American and Filipino, and is also a play on the word summation.
Conner is appreciative of Black History Month, but separates his race from his art. “If it takes a month to help people recognize [other less prevalent cultures], that’s cool and I’m all for it…before I think about race when I do art, it’s more about my beliefs and my faith. It’s the backbone of all the art I do.”
art Long Beach Magazine non-fiction profile