May 05, 2011
As appeared originally in Long Beach Magazine. 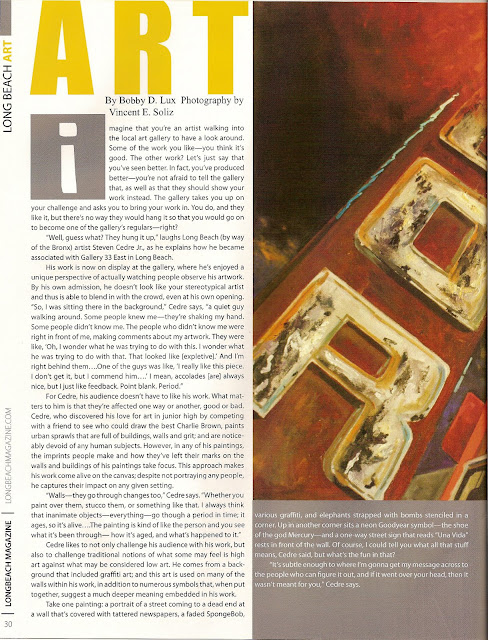 Imagine that you’re an artist walking into the local art gallery to have a look around. Some of the work you like, you think it’s good, and of the other work . . . let’s just say that you’ve seen better. In fact, you’ve produced better and you’re not afraid to tell the gallery that and that they should show your work instead. The gallery takes you up your challenge and asks you to bring your work in. You do and they like it, but there’s no way they would hang it up and you would go on to become one of the gallery’s regulars, right?
“Well, guess what? They hung it up,” laughs Long Beach by way of the Bronx, Puerto Rican artist Steven Cedre Jr. as he explains how he became associated with Gallery 33 East in Long Beach.
His work is now on display at the gallery where he’s had the unique perspective of watching people observe his artwork. By his own admission, he doesn’t look like your stereotypical artist, and thus, is able to blend in with the crowd, even at his own opening.
“So, I was sitting there, in the background, quiet guy walking around. Some people knew me; they’re shaking my hand. Some people didn’t know me. The people who didn’t know me were right in front of me making comments about my artwork. They were like, ‘Oh, I wonder what he was trying to do with this. I wonder what he was trying to do with that. That looked like @#!%.’ And I’m right behind them. One of the guys was like, ‘I really like this piece. I don’t get it, but I commend him . . .’ I mean accolades [are] always nice, but I just like feedback. Point blank. Period.”
For Cedre Jr., his audience doesn’t have to like his work. What matters to him is that they’re affected one way or another, good or bad. Cedre, who discovered his love for art in junior high by competing with a friend to see who could draw the best Charlie Brown, paints urban sprawls that are full of buildings, walls and grit and are noticeably devoid of any human subjects. However, in any painting of his, the imprint people make and how they’ve left their mark on the walls and buildings of his painting take focus. This approach makes his work come alive on the canvas, despite not portraying any people; he captures their impact on a given setting.
“Walls, they go through changes too,” Cedre Jr. says. “Whether you paint over them, stucco them, or something like that. I always think that inanimate objects, everything, goes though a period in time; it ages, so it’s alive. The painting is kind of like the person and you see what it’s been through, it’s aged, and what’s happened to it.”
Cedre Jr. likes to not only challenge his audience with his work, he also challenges traditional notions of what is considered high art vs. low art. He comes from a background that included graffiti art and this art is used on many of the walls within his work, in addition to numerous symbols that when put together, suggest a much deeper meaning embedded in his work.
Take one painting: a portrait of a street coming to a dead end at a wall that’s covered with tattered newspapers, a faded Spongebob, various graffiti, and elephants strapped with bombs stenciled in the corner, up in a corner sits a neon Goodyear symbol. (The same symbol for Mercury, the messenger), and a one-way street sign that reads, “Una Vida” rests in front of the wall. Of course, I could tell you what all that stuff means, quoted from Cedre Jr. himself, but what’s the fun in that?
“It’s subtle enough to where I’m gonna get my message across to the people who can figure it out, and if it went over your head, then it wasn’t meant for you,” Cedre says.
art Long Beach Magazine non-fiction profile