October 06, 2011
It's been too long since I've mused poetically on MMA, so let's jump back into the pool with a prediction column for UFC 136 - Edgar vs. Maynard III. The eleven fight card is headlined by the third bout pitting UFC Lightweight Champion Frankie Edgar against Gray Maynard. The card also features a second title clash, this one in the featherweight division between division ruler Jose Aldo who puts his belt on the line against Kenny Florian. 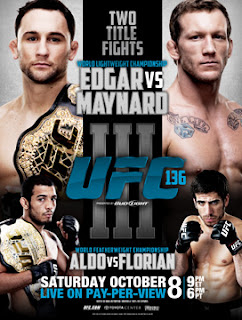 Main Event - UFC Lightweight Championship
Frankie Edgar (c) (13-1-1) vs. Gray Maynard (10-0-1)
When these two locked up at UFC 125 in January they made a compelling case for fight for year in a fight a where a draw felt an oddly appropriate outcome. Maynard absolutely dominated Edgar in the first round and looked moments away from taking the title, but then Edgar rallied for the next four rounds to fight off Maynard.

Who takes the rubber match? Who knows? Maynard has the size advantage and is the harder hitter and stronger wrestler. Edgar is quicker and more technical. Edgar has to use his boxing and footwork to keep Maynard away from him, nullifying his power and wrestling while tiring him out. Maynard has to close the distance to land his bombs and take the champ to the ground where he can unload on him. Either outcome can happen.  As are a dozen variations of those themes. Most likely, it's going to be a combination of all of the above.

It could boil down to Edgar's experience in his pair of title fights with BJ Penn and the mental toughness he displayed after the first round his suffered against Maynard in their previous 2011 fight.

Prediction: I'm taking the champ in a very tight decision.

Co-Main Event - UFC Featherweight Championship
Jose Aldo (c) (19-1) vs. Kenny Florian (14-5)
This fight marks Florian's third, and most likely final, shot at grabbing UFC gold, having come up short in a pair of attempts at the lightweight throne against Sean Sherk and BJ Penn, respectively.

Aldo looked human in the cage for the first time in his defense against Mark Hominick at UFC 129 where he was noticeably tired at the end of the grueling fight. Kenny Florian is going to be a tougher fight than Hominick and if Florian can tire Aldo out, he's got a good chance here. Florian's weakness has always been strong wrestlers, and while he doesn't have to worry about being held down and smothered by Aldo, he does have to contend with Aldo's dynamic and powerful striking.

Of his three shots at a title, this is Florian's best shot at getting his hand raised, but he's facing a younger, stronger fighter in Aldo, who is also the better overall striker. Florian arguably has the BJJ advantage, but he's got to get Aldo on the ground first, a task that Mike Brown and Urijah Faber (each better wrestlers than Florian) struggled with.

Prediction: Aldo retains with a late round TKO, probably in the 4th.

Middleweight Fight
Chael Sonnen (25-11-1) vs. Brian Stann (11-3)
Sonnen returns to the cage after his heartbreaking last minute defeat at the legs of Anderson Silva at UFC 117. Waiting to greet him is "All American" Brian Stann, who has been surging through the middleweight ranks following wins over Chris Leben and Jorge Santiago.

For Stann to win, he has to keep the fight standing where he can let his powerful hands fly. The problem is that Stann has to always be ready to defend against Sonnen's powerful, driving double legs and that's going to keep Stann from getting down on his punches and letting his hands go.

Sonnen showed in his fight with Silva that he's more than capable on his feet and with Stann worrying about the constant threat of a takedown, Sonnen will be able to land more with his punches, which is only going to make it easier for him to take the fight to the canvas. Once it's there, Sonnen should grind away on Stann from bell-to-bell.

Lightweight Fight
Melvin Guillard (29-8-2, 1NC) vs. Joe Lauzon (20-6)
Melvin Guillard is finally living up to the potential that many longtime fans knew was brimming just under the surface. Submissions have always been the glaring weakness in Guillard's game and Lauzon is going to be a tough test if the fight becomes a submission battle. Lauzon has to be able to hang with Guillard on the feet long enough to drag The Young Assassin down to the mat. The longer that takes, the more likely it is that Guillard connects with the bricks he has underneath his gloves.

Lauzon is a game opponent and can win if he dictates where the fight happens, but I think Melvin gets to his chin first.

Prediction: Guillard wins by KO in the second round.

Featherweight Fight
Nam Phan (16-9) vs. Leonard Garcia (15-7-1)
Like in the main event, there's some unfinished business here to be dealt with here between Phan and Garcia. In their first fight last December at The Ultimate Fighter 12 Finale, Garcia took home a controversial split decision win in a brawl where most viewers agreed with the judge scoring the fight for Phan.

This fight looks to be a continuation of the first one. Garcia is going to rely on his iron chin and hay makers and Phan is going to be the more crisp and technical striker. It's going to be another fun and exciting fight, but this time around the judges will get it right.

Lightweight Fight
Jeremy Stephens (20-6) vs. Anthony Pettis (13-2)
This is a closely matched fight between a pair of fighters looking to crack their way into contender status. If Stephens can make it a brawl, he'll find his best shot at stopping Pettis, who will counter Stephens' power with precision striking and movement. Pettis will wear out Stephens en route to late round submission win. Stephens can end it at a moment's notice, but Pettis has too many tools for that to happen.

Prediction: Pettis with a submission in the third.

Middleweight Fight
Demian Maia (14-3) vs. Jorge Santiago (23-9)
In over 30 professional fights, Santiago has found success everywhere he's fought except in the UFC. It's a pattern that's not likely to change here against Maia. Santiago has a puncher's chance but that's about all. Santiago's never been submitted in the career, and that's a streak that ends on Saturday. Santiago is a good grappler with some impressive wins, but Maia's ground game is on another level.

Prediction: Maia gets clocked a few times, but wraps up a choke late in the first.

Heavyweight Fight
Stipe Miocic (6-0) vs. Joey Beltran (13-5)
Beltran is as tough and as game as they come, and it won't come easy, but this fight is going to be a nice welcoming party to the UFC for Miocic, a Division I wrestler with good boxing who has stopped all of his opponents with strikes. It will take more than two rounds, but Miocic ends this before it gets to the judges.

Prediction: Miocic stops Beltran with strikes in the third. Once again, we'll be seeing how tough Beltran is.

Middleweight Fight
Steve Cantwell (7-4) vs. Mike Massenzio (12-5)
Cantwell is dropping to middleweight after dropping three straight at light heavyweight. Neither fighter has found much success in the UFC. Massenzio has the grappling advantage and it should be enough to earn him a win.

Middleweight Fight
Aaron Simpon (10-2) vs. Eric Schafer (12-5-2)
Schafer's previous two UFC fights saw him on the wrong side of decisions against wrestlers in the light heavyweight ranks. Now fighting as a middleweight, Schafer again faces another tough wrestler in Simpson has dealt with cardio problems in past fights. At middleweight, Schafer may find more success against a gassed Simpson.

Prediction: In a bit of an upset, Schafer locks up a late sub in the third.

Featherweight Fight
Tiequan Zhang (15-1) vs. Darren Elkins (12-2)
On paper, Elkins has had more success against better fighters, but his most recent win over Michihiro Omigawa at UFC 131 was a gift from the judges. Prior to that, Elkins was caught in an early sub by Charles Oliviera. I see a similar ending here against the Chinese prospect with a solid submission attack.

Prediction: Zhang with a sub early in the first round.
mma UFC UFC 136