The Grifters by Jim Thompson - Everyone is Someone Else's Mark


For those expecting a plot-point-a-minute heist or caper tale, keep looking. 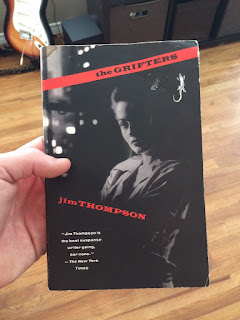 The real con, and the art of the con, whether you're running the long or the short con, is getting those emotional hooks in your mark. Once they're in, you can run whatever scam you want on them and take them for every penny. That's the heart of The Grifters by Jim Thompson. Everyone is someone else's mark. There's a reason that a con is short for confidence.

Roy Dillon is a master of the short-con, plying his trade in sunny, fractured, Los Angeles, while maintaining a well-manicured cover life as top-flight salesman. What better day job for a con artist, going door-to-door, sweetly convincing people to part with their money?

For Roy, the worst that could happen running a short con is that you catch a thump in the stomach once in awhile. That's not so bad... unless it causes unchecked internal bleeding or something. But then, the truly worst thing that could happen to Roy does - his mother comes to visit.

Lily Dillon is too a grifter. Only fourteen years older than her son, she's been wrapped up in the con game and underworld for her entire life. A victim of circumstance much like her son, but far beyond the age where that crutch can be used to prop up a life of criminality. Like mother, like son, Lily is also an expert con-artist, the long-con being her preferred modus operandi.

After largely being a mother in absentia to Roy, Lily interjects herself into Roy's life and his recovery, first by both securing the services of a private nurse for her son and creating space between Roy and Moira, the closest thing Roy has to a stable relationship in his life. While Thompson is sometimes light on the physical descriptions of his characters, there's an important one to note here: Moira could pass for Lily and perhaps vice versa.

The story is largely divided in two parts. The first half with Roy directly recovering from a short con gone wrong. The latter half with Roy deciding if the con game is for him or not, and if he's outgrown it and should take the straight life and settle down in Los Angeles. After all, he'd hate to end up like his absent mother, having no choice but to desperately run cons for his whole life, even when it means that your target is the person presumably closest to you...