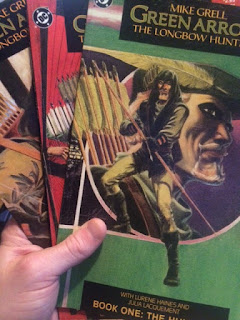 I really want to give The Longbow Hunters a higher score, and perhaps if I had read this at the time of its publication, I would have because it's a really important Green Arrow story. But I was around nine at the time it first came out, so there's that.

The success of The Longbow Hunters paved the way for the first ongoing Green Arrow series and arguably got the ball rolling to lift Oliver Queen out of the second or third string of the DC roster.

And really, this just hasn't aged well is all. It's not bad, but it's definitely a product of its time. With very few tweaks, it could be a 1980s rogue cop B-Movie with Oliver Queen in the role reserved for [insert action hero here]... A lot of the elements were there: drug dealers, a serial killer targeting prostitutes, cheesy sex and nude scenes, secret CIA agents, and so on. It feels like it could have been a Steven Seagal movie, but that seems demeaning to Green Arrow. Chuck Norris? Maybe. But still, you get the point.

The story is the first appearance of Shado, a female Yakuza-trained archer hell-bent on revenge, who would later appear in Arrow, the TV series. Other than her, the females don't get much to do here besides being a victim of a serial killer, compliment Green Arrow on how great or sexy he is, or is someone to be rescued by Green Arrow. Most notably in this category is Black Canary. Without Oliver's blessing (how dare she not ask permission?!!!), Black Canary goes undercover to try and infiltrate a drug ring. Next time we see her, she strung up, beaten to a pulp and naked except for a shirt that barely covers anything, and dripping blood while a psychopath gleefully decides whether or not to gut her quickly or to make it last longer.

Thankfully, Oliver is there in time to kill (yes, kill) the would be torturer of the love of his life. It would have been interesting to see how this guy had gotten the one-up on Black Canary. One of the ideas in this story that wasn't really fleshed out enough was that both Oliver and Dinah are getting older. Not old. Just older. In his case, he's slower and losing fights he wouldn't have lost in his prime. How did putting a few years on affect Black Canary? Would have been interesting to see that.

Some of the criticism thrown at Batman V. Superman feels like it applies here, namely that it's arguably too dark of a story, and there's nothing "fun" here. However wrinkled with age this story may seem now in 2016, I appreciate the effort that went in to telling a story that tried in earnest to make it about real human beings.

That being said, even the totally unnecessary nudity didn't bother me, but next time: please don't show Green Arrow's shadowy nutsack as he's getting out of the bath.Check it out!