Showing posts from July, 2016
Show all

Another 2016 Election Post -- AKA Oh God Please Let it Stop

Look, let's be honest, Bernie would be a one-term, ineffective President. And the course correct from the right following a one-term, so-called "socialist" presidency would be frightening. Carter led to Reagan (who got mini assist from 'ol Teddy Kennedy, but anyway, I'm trying to be fair here). Who or what would Sanders lead to? Probably the evil robot from Robocop.

And look, I like the guy. He earned my vote. I think his heart is in the right place and I think he's as honest as you can get from someone who wins elections for a living. But do I think that expecting some sort of liberal revolution to be followed by lefty paradise to come from a guy who went to, and has stayed in, congress a year before Nirvana's Nevermind came out? If I may speak Internet for a second here: GTFO.

My prediction -- Here's what history will show the lasting legacy of the Sanders campaign to be: he's changed the face of th…
Post a Comment
Read more 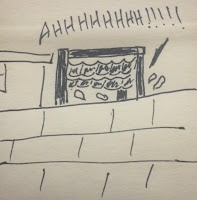 An Afternoon Metal Medley in Purgatory – 7.20.16
I’m never more thankful for owning a complete catalog of Slayer’s full discography as I am when the neighbors have their friends and their offspring over for a pool party.
I don’t have many hard rules in life but if I’m going to hear shrieks to the heavens someone better be banging the hell out of a high hat.
Post a Comment
Read more

July 13, 2016
The First Shots Fired in The Great Culture War of ’91 – 7.11.16 I first got really involved in political activism
when I was thirteen. It was a Friday night,
or it could have been a Saturday evening.
My friend and I rode our bikes downtown
to the theater across the street
from the beach
for an eight o’clock show.
There were around a dozen people,
mainly women and children, at the bottom
of the escalator protesting the screening
of an NC-17 film.
That wasn’t the one we
were going to see,
but we changed our cinematic plans and
decided to sneak into it.
They had signs with stupid slogans
and they just stood in the way of progress and
of getting to the theater.
We walked through them and as we began
our ascent up the escalator I realized that this
was one of those moments where history
thrusts itself upon you and one must
decide if they will duck under it
or ride the wave of the moment.
Heroes are made in these times.
Halfway up, I could no longer keep my thoughts within
and enlisted myself among the ranks
of the f…
Post a Comment
Read more

July 11, 2016
If I had to be forced into a full star rating system, I would begrudgingly round up Los Angeles Noir to three-stars. But this is my blog, so we're knocking that down to a 2.5

I've read three of the Noir series from Akashic Books (LA, Vegas, OC) and the collections are very up and down as far as the story quality goes. The LA entry into the series is no exception, which is disappointing when you consider how often Los Angeles has proven to be a formidable home for many classic noir tales.

There's a lot of hit and miss here, leaning more towards the miss. Without naming names, I suspect some of the stories were selected for the collection based on the author's bio versus the quality of the story.

I think a better editorial focus on what noir means to them would strongly help in collections like this. Even thematically, there's not a lot linking the stories together beyond basic geography. A lot of these stories could have taken place anywhere, in any large metropolitan…
Post a Comment
Read more
More posts